What the Hatmaker Heard :: All Hats on Deck :: Death Comes to Dogwood Manor
Someone's Mad at the Hatter :: Something Foul at Sweetwater :: Murder at Morningside

"I think this series is one to watch. I suggest you sit back on your
porch with a big old glass of sweet tea and enjoy!" - Cozy Mystery Book Reviews

"Missy is one of my all-time favorite sleuths!" -Bibliophile Reviews 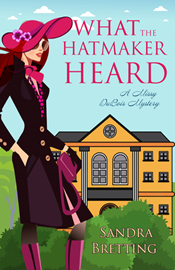 When a groom gets murdered, Louisiana hat maker Missy DuBois must look behind a veil of secrets on a former sugar plantation . . .

Bride-to-be Lorelei Honeycutt is brimming with excitement over the elaborate headpiece Missy has created for her wedding but fears she won't be able to maintain her balance when she walks down the aisle. She’s asked Missy to assist her during the rehearsal at Honeycutt Hall, a once grand sugar plantation now used as the family's home. Missy’s trying to keep a cool head herself, as her own wedding is coming up in three short weeks on the Riverboat Queen. But after the rehearsal, she overhears the bride and groom quarreling. The next morning, Wesley Carmichael is missing. After searching the house and grounds, Missy discovers the groom lying at the bottom of an old, unused sugar silo—and now it's up to the mystery-solving milliner to find an unbalanced killer . . . 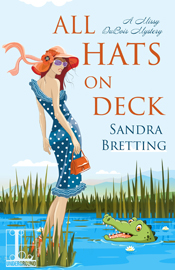 No Southern wedding is complete without a special veil designed by Louisiana hat maker Missy DuBois. But it’s hats off to Missy DuBois when she tries to save her town from a bayou killer …

When Ruby Oubre asks Missy to advise her grandson on a business idea, the successful owner of Crowning Glory is happy to oblige. After navigating the Atchafalaya, Missy meets with eighteen-year-old Hollis about the viability of opening an alligator farm for tourists. But it isn’t an alligator Missy finds floating at the mossy bottom of the Atchafalaya River. It’s Ruby, and her death wasn’t caused by accidental drowning. It seems everyone from local tour boat operators to the chief of police and the mayor of Bleu Bayou had an eye on snatching up Ruby’s riverbank property. If Missy doesn’t unveil a greedy killer soon, her hat-making career could be bogged down for good … 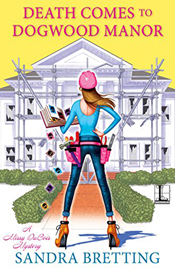 While driving to her hat shop, Crowning Glory, Missy accidentally sideswipes a car parked in front of Dogwood Manor, an antebellum mansion being converted into a high-end hotel by the much-reviled property developer Herbert Solomon. Of course, the car is his Rolls Royce. But Solomon is too busy berating his contractor and interior designer to worry about a little fender bender. When Missy returns to check out the mansion’s chapel where her latest client will be married, she finds the developer dead on his property. After an autopsy finds poison in his body, Missy’s shop is then flooded right before it’s supposed to be featured in an article about wedding-veil trends. Now before everything becomes sheer disaster, she’ll have to train her sights on finding a killer . . . 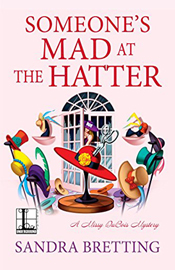 Missy DuBois’s Louisiana hat studio is the destination for Southern brides who want to make a fashion statement. But designing headpieces isn’t her only talent, she’s also got a head for solving murders . . .

It’s not uncommon for folks to live it up a little too much on New Year’s Eve. But when Missy walks into her parking lot at Crowning Glory on New Year’s Day and discovers professional wedding planner Charlotte Deveraux inside a whiskey barrel, the poor woman isn’t just hung over . . . she’s dead. Since the murder weapon was an old hat stand that belonged to Missy, her customers are cancelling appointments and everyone in town seems to be turning up their noses at her. Despite plenty of intrigue to motivate a hatful of suspects, suspicion keeps falling squarely on Missy. All the more reason to clear her name—or the next veil she designs will come in a shade of black . . . 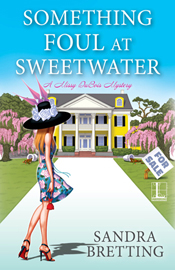 Missy is shocked when she sees the asking price for the Sweetwater mansion . . . in a good way. With business thriving at Crowning Glory, it would be nice to set up shop surrounded by alabaster columns and gleaming mahogany. The Southern connections only deepen when it turns out the real estate agent is Mellette Babineaux, a college classmate and sorority sister. But when Missy drags her best friend Bo along to the mansion for a second look, they barely make it past the live oaks before they discover Mellette’s dead body in a shed. Now, for the sake of her college friend, Missy finds herself investigating everyone from a superstitious Cajun caretaker to a Rolls Royce-driving billionaire—and finding that lots of closet space can mean lots of skeletons, too. 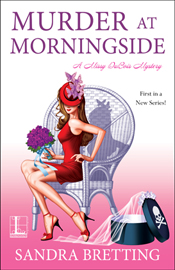 The Missy DuBois Mystery series takes place among the majestic plantations of Louisiana. Missy is a bona fide Southern belle who moved to the Great River Road to create custom veils for the brides who flock there each summer. She’s hired to work one weekend at Morningside Plantation, where she dreams of relaxing under old oaks and sipping juleps in the gilded ballroom. Those plans go south, though, when the bride she's hired to dress is murdered the night before the big event.